Honourable Minister of Health, Dr. Chitalu Chilufya, has officially launched a new health initiative partnership with a high-ranking group of German companies and organisations, to improve the rural health care, facilities and services in Mumbwa District.

There are over 5,000 people living in the area directly surrounding the Health Post, which is next to Amatheon Agri’s farm. The facility was opened to the public in August 2017 and has so far attended to 16, 971 patients. 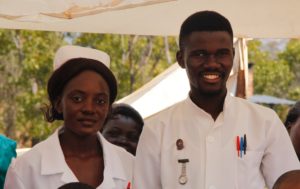 “This partnership is a powerful example of likeminded people coming together, combining experience and expertise from a variety of industries, and committing to strengthening the health system surrounding our farm,” said Amatheon Agri CEO and Founder, Carl Heinrich Bruhn.

“As a company, we are committed to supporting the social infrastructure around our operations, and we know that this project will go a long way in terms of improving the much-needed health services and delivery in the area,” said Bruhn.

Before the post was opened, health services were only accessible more than 15kms away. The commissioned health facility will go a long way in the provision of health care services to the Kafwikamo community, especially by mitigating the difficulties of travelling long distances to access primary health care services.

Community health volunteers will be provided with bicycles which will help them carry out their services and teach basic health tips to people in very remote areas. Essentially, it will help take the services as close to families as possible, thus cutting down on the high number of patients coming to the health facility. This will make it possible for the health staff to focus more on critical cases.

The ambulance being provided through the project will be based at Kafwikamo Health Post. Previously, the ambulance service used to come in from Mumbwa District which is situated about an hour’s drive from Kafwikamo.

This website uses cookies to improve your experience while you navigate through the website. Out of these cookies, the cookies that are categorized as necessary are stored on your browser as they are essential for the working of basic functionalities of the website. We also use third-party cookies that help us analyze and understand how you use this website. These cookies will be stored in your browser only with your consent. You also have the option to opt-out of these cookies. But opting out of some of these cookies may have an effect on your browsing experience.
Necessary Always Enabled
Necessary cookies are absolutely essential for the website to function properly. This category only includes cookies that ensures basic functionalities and security features of the website. These cookies do not store any personal information.
Non-necessary
Any cookies that may not be particularly necessary for the website to function and is used specifically to collect user personal data via analytics, ads, other embedded contents are termed as non-necessary cookies. It is mandatory to procure user consent prior to running these cookies on your website.
SAVE & ACCEPT